Apologies for a late update on the exhibition that Terence and I have put together here in Canberra: I have been super busy, plus I've been hoping that the official UNSWC photographer who covered the opening would send me his pictures, but they haven't arrived, and I had a space this morning so I'll just work with what I have!

What I have isn't too shabby. I've just uploaded a stack of photos into Flickr so head over there to see everything. Here's a few shots of the space, which is pretty stunning (they have given it a makeover since my solo show there last year). 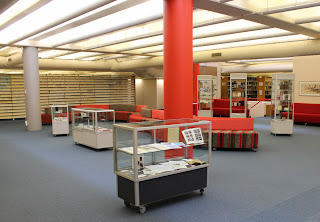 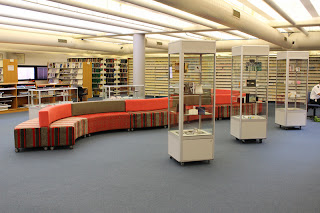 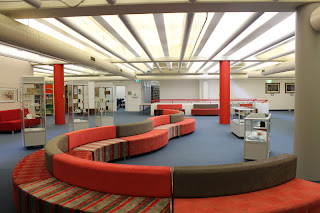 I know that I haven't documented every book in the flickr set, apologies. And Sara's book turned up after this photo session, and it got inserted into one of the horizontal cases, so I'll update those images next time I get a chance.

The opening was fabulous, this institution do such a wonderful job. I'll put up photos when they arrive (I was going to take my own, but there was too much to do and a proper photographer walking around!).

Many thanks to Terence, who just loves playing with a space, and who went at those couches like a small boy with Lego: 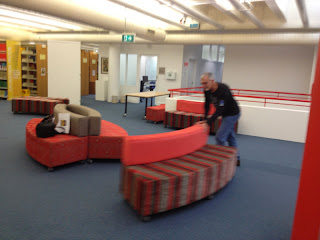 We had a lot of fun, and I learned a lot about book structures from Terence's excellent structural vocabulary.

And many thanks to the UNSW Canberra team: Lisa Morisset, Rachel Hunter, Yvonna Gruszka, Denise Shepherd, Lyn Christie, and all the nice librarians.

I hope, if you're in the region, you get to see the show, otherwise we will keep adding to the flickr set and make it well-documented!