Copies of "The Clearing" have already been mailed to my fellow Group Two-ers, and now that I know at least one of them has made it to Australia (thank you for reporting in, Terence), I wanted to finish up with a little posting for the entire group.  This has been a VERY interesting experience!
As I pondered the title and what this book should be, I kept thinking about trying a tunnel structure for the first time (always a good idea when you are also tackling an edition for the first time…NOT!).  I thought about how it might be nicely mysterious to peer through a dark forest into a clearing, to spy on some mysterious goings-on. What would be happening? Didn’t know then, still don’t. And I had to get it done by April (not because I'm diligent, but because I am lucky enough to be travelling most of the summer).
So for the last three months I experimented with the tunnel structure, modifying it slightly (to make it conducive to repetition, avoid the bowing that some tunnel techniques seem to involve,  and make it somewhat stable).  I bought a lot of blades for my X-acto knife, collaged up a storm, and worried about my rudimentary bookbinding skills.  It felt rrrreally satisfying to glue that final stamp on the last book package!
So, here it is. 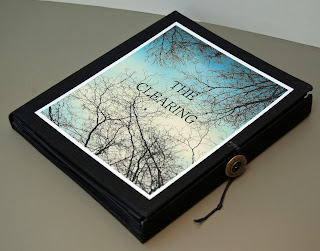 In its final form, “The Clearing” is a six-panel collaged and paper-cut tunnel book created in an edition of ten.  Covers are black cloth-covered boards; the cover title block is created from a photo I took outside my house last year.  The endpapers are copies of the first page of a letter written in 1934 by one of my husband’s Swedish ancestors to his grandmother in North Dakota.  Paper cord and a decorative metal button form the book closure. 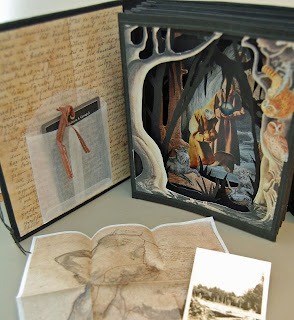 The tunnel panels reveal a forest clearing in which two robed figures are huddled. They are guarded by owls and wolves.  A glassine pocket on the inside cover houses several items: a ribboned tag which serves as the colophon, a small vintage photograph (a different photo in each book), and a folded map  – clues, perhaps, as to where and what the clearing might be.
Cheers all, Lynn
Posted by paperworker at 6:33 AM 14 comments:

There is something very satisfying about seeing the face, hearing the voice when all previous contact has been , shall we say, ethereal.

Yesterday, I met Angela and Abi in London (I'm staying on the southern fringe) and we took in a couple of exhibitions at the Hayward, sloshed through puddles and wound up our afternoon with restorative glass at a handy pub.

The conversation? Well, books, of course! And we touched on the folly of library closures, the somewhat rigid view some folk have of artist books, the long-distance companionship of collaborations like ours. Politics may have entered into it, but I'll leave that out for the moment!

And suddenly it was time catch our various chariots. A nice young tourist chap obliged with a picture... 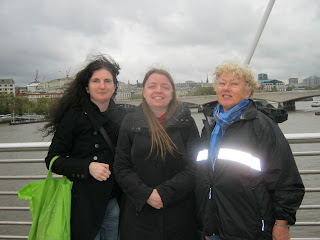 Dear all, I find myself very inspired by the title and subject of my book art object: Dust. I'm almost ready with the concept and the design, and I've written a poem that will get a place in the book. The text will be letterpress printed. I'm still looking for the right paper, experimenting with different sorts and qualities. On my *new* blog on www.falstaff-fakir.nl/weblog, I've published a few of the photographs I'll probably use in some or other form.
Here's another one:

On Monday, the four of us pictured below, having discovered we are all living in Brisbane (or very close) finally coordinated for lunch. Naturally we chose a venue with both food and books, the Riverbend Bookshop & Cafe in Bulimba.


To me, it felt like a meeting with old friends right from the start. We of course talked artists books, asked each other a few "how did you do that?" questions we'd been saving for the day and even had a little round of Show and Tell.

I left feeling extremely lucky to be one of the first to see Helen's beautifully completed "That Unbearable Lightness" and the prototype of Jack's "Transparent". (All of you in Helen and Jack's groups  who will be receiving copies of these have a treat in store!). Robyn generously gave us each a handmade bookmark. You can see mine below - in use immediately! Thank-you Robyn!


I think I can safely say that everyone enjoyed the time as much as I did, given that we have already scheduled another get-together once the travellers among us (Helen and I) return. If there is anyone else nearby who would like to join us next time, just let us know.
Posted by Amanda at 7:37 PM 3 comments:

Short technical rant: thanks to the new updated Blogger interface I can no longer see Blogger properly in my internet browser and NO THANK YOU I don't want to install Google Chrome!  It's got me thinking - again - about changing platforms and moving the blog onto something else, such as Wordpress.  Any comments?  As it is I'm writing this on my husband's laptop because he has Mozilla Firefox installed, which is much more compatible with the new Blogger interface than IE9...  Is anyone else having problems?
Posted by Sara Bowen at 6:33 PM 15 comments:

Things to consider when finishing your edition 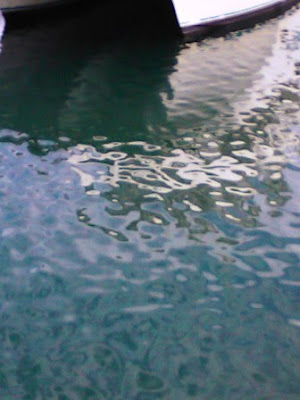 I am so impressed by the fact that some people are already finishing their editions when I haven't even begun mine yet... and the receipt of the first book destined for Sarah Bodman made me realise that there are probably some things you need to think about when sending me Sarah's copies.

Firstly, Sarah is likely to exhibit our work at some point so it will be very helpful is you can include with your work a label with your details and edition details on it, attached to the book in some way (or at least included in the wrappings) i.e. your name and contact details, the title of the book, your group number, when you finished it, edition number etc.

Secondly, it would also be good to include some biographical information as well, just in case Sarah puts together a catalogue i.e. country of residence, a CV/resume and an artists' statement.

Lastly, I am easily confused!  It would help me greatly if you can indicate in the package that you ARE sending me Sarah's copy of your book, just so that I don't have to work it out for myself!  Some of you who are in my groups will obviously be sending me TWO copies of your book: one for me and one for Sarah Bodman.

p.s. totally spurious photo... it's actually a shot from Coffs Harbour marina where we went walking over the Easter holidays and has NO relation to BAO or my intended editions... but blog posts look SO much better with a picture!
Posted by Sara Bowen at 6:29 PM 3 comments:

Today I Go To The Post Office! But First, An Intro...

Spent the morning doing a VERY satisfying task -- wrapping my little books in tissue, depositing them into padded envelopes and adding mailing labels to fellow Group Two book people in three different countries.  I'll wait to post details for a couple weeks to make sure the Group has the book in hand before I share any info.

This is my first edition with BAO and my first attempt at making an editioned book. Normally, I work in two-dimensional collage and OOAK artists books, usually featuring collage work and paper-cuts.  You can find some of my personal collage work at www.regularpaper.blogspot.com and a few photos of some of my book work on a general portfolio site at lynnskordal.paspartout.com.  Personal details:  I am a retired lawyer, been collaging for about five years, book-making (sounds illegal!) for two.  I live on an island in the middle of a lake in the middle of a large city in the beautiful Pacific Northwest (USA).  A few samples of my work: 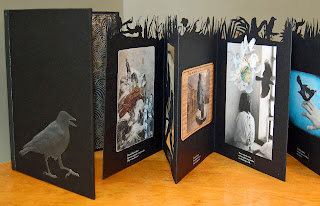 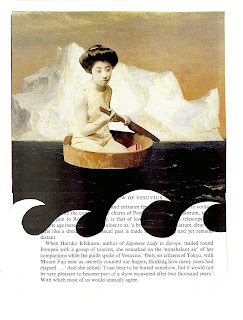 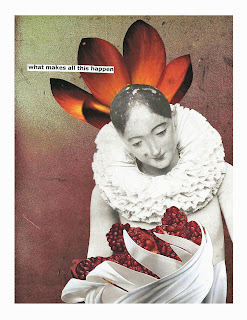 Best to all of you and so looking forward to receiving your books!

Lynn Skordal (aka "paperworker")
Posted by paperworker at 4:33 AM 10 comments:


I’m sorry to have to do this to the group but it is with much regret I’m going to have to bow out
of this project.
I've recently been diagnosed with a heart condition and I just have to peel back on some of my art projects and commitments, for now at least.
I really hate to do this, I have already received a beautiful book from Cheryl Penn, (which I will return to her with additional cost for her postage) but please don't send anymore books to me as I won't be able to exchange.

I shall continue to read with interest this blog and hope that at some point in the future I will beable to take part in another project.
I hope you will all accept my heart felt apology, 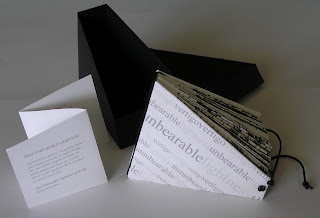 These books were posted to members of Group 5 three weeks ago, so it seems timely to post some images now of my first book for BookArt Object.  It has been a very enjoyable experience for me.  I made an edition of 15 and found it quite calming and meditative doing the same actions time after time. 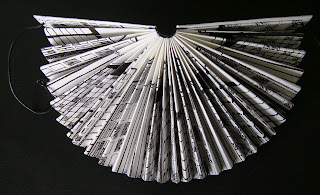 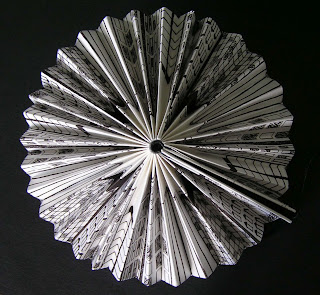 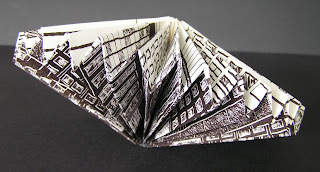 There is a longer post and photographs about the making of this book on my blog here.

It's been such a great experience that I'm now looking forward to tackling a second book for BAO, #56 Unchartered Democracy, in Group 10.
Posted by Helen M at 9:15 PM 14 comments:

When I came across these links in an article about Brooklyn (because a big piece of my heart is still there!) I did think all you BAOers would like to see them. Then I thought perhaps I shouldn't get too side-tracked from our current work.
So I did send emails to a few of you and Sara came back, saying they'd be lovely up here, for all of you (and other lurkers) to read.
But I must warn you...no spillable liquids as you read, because mopping up messy keyboards is a waste of time, right?


And this is an interview with the women. Damn! I wish I'd known about them when I was in Brooklyn!
http://brooklyn-spaces.com/2011/09/a-wrecked-tangle-press/