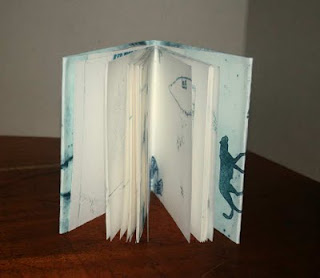 They get dirty fairly easily so I have to be ever so careful with them.  I was shooting some photos outside my studio on Sunday afternoon,  and was just finishing when a tiny insect landed on one of the open pages - it was also starting to rain and I was frantically trying to finish the photos ......... anyway ....I brushed the insect aside and 'lo and behold'............ small amount of watery blood  (eek!!) so I quickly tried to get that sorted.  I think its OK  - otherwise  the total would have been down to three !! 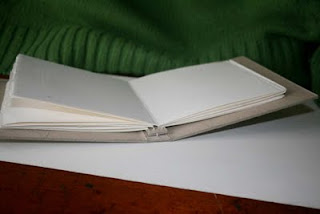 Then a couple of weeks ago, in the midst of covering/ gluing  books - I noticed blood on one of the covers and the reverse .............. only then realizing  I had a tiny cut on my finger !!  I managed to get that off (the blood not my finger)  as I immediately removed it carefully.  This has been a mammoth project for me and as Sara will know I even pulled out of it at the beginning as I felt it would be too physically taxing and challenging.  I have learnt so much about making books using stitching (having never used this process previously)  .  Making an edition,  however has limited my creativity although it's still very much so present, within the imagery. 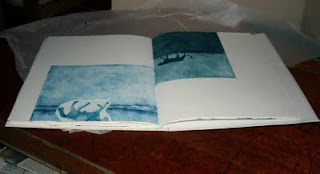 I am going to include some images here although none of the finished works nor the imagery within.  Just shots of some of the book format try outs and some of the images that were potentially for inclusion though not selected. 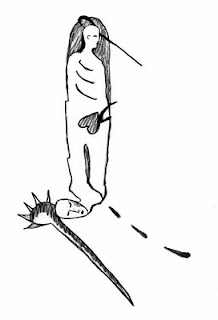 hope everyone else is coming towards the final stretch too !!

we put ourselves through a lot for our art! can't wait to see something turn up in the post!

Hey Aine, the snapshots look great! I can't wait to get my copy in the post... and BTW for everyone else I've been very lazy about posting on the wonderful books I've received recently from Carol, Alison and Fiona - but I will soon, I promise! Sara x