I would just like to say at this point, even though we haven't totally completed our first round of books, how wonderful it has been to receive these books, all very different, all amazing in their own ways.

As each book has arrived, I have taken them to my book class, and we've discussed the bindings and the interpretations. They have been really well received, and it's been a great way to talk about retaining your individuality within a group brief.

I can't wait to have the entire set; I'm going to make a dedicated box for them (and will do the same for future sets) and use them as teaching tools for years!
Posted by Ampersand Duck at 2:10 PM 4 comments:

Anna, from Artspace, emailed the Libris Awards catalogue. I have sent copies to Sara, Amanda and The Duck,since they had work in the show. But if anyone else would like a printed list (no pics) of entries email me: diane dot patmore at gmail dot com and I'll flick it your way.
Posted by dinahmow at 3:18 PM 2 comments: 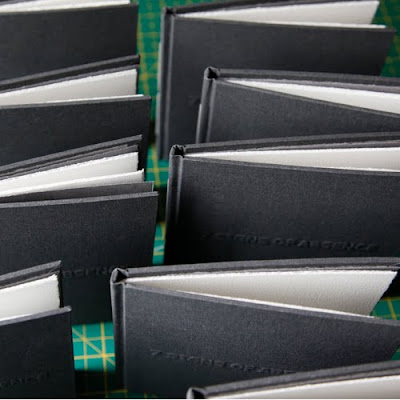 Well I finally posted my books yesterday. It was such an intense process at the end, working every evening and weekend to get them finished, that it feels odd now to be doing 'nothing'! I don't know how long they will take to arrive, but if you can let me know when you get them. I hope you all enjoy them.
Posted by Angela at 9:49 PM 18 comments:

Finally, I've managed to find a patch of time in which to concentrate on my BAO contribution... but, as we've all come to realise (except for the divine Ms Sara, who seems to be able to whip things up in a very organised manner), simple plans have a way of blowing out. Sometimes an idea comes to fruition easily, sometimes the process is a bit more laboured, and I think the process is akin to everything I've ever heard about writing a novel. I've heard lots of writers say that they create a character, only to have that character rebel against any ideas the author might have had for them. My book is doing a similar thing! This is always how I start out, writing to myself and working out dimensions. Very few drawings, although images or words sit inside my head. On another page, I have the lines of the poem written, with notations around them about what they suggest to me.

Originally I thought about presenting the poem very literally. I set the type, in 10pt Sabon (I decide it should be a small book, that nestles in your hands), and I started cutting lino blocks: I cut a Halley's comet, a benchtop with note upon it.

One of the advantages of being very busy is that I didn't finish that second block, and the whole thing got put aside for a while. When I came back to it, I had changed my mind. I'd read the poem a few times by now, and I also have the advantage of hanging around the poet on a regular basis. This makes it hard to separate the poem from the writer, and I realised that instead of fighting that connection, I should tap into it, draw from it, while keeping away from the literal.

I decided to use monoprinting to make images for the pages. Have you ever tried it? It's like making a painting that you print, and only get one print from. I decided that loneliness and grief -- the two dominant emotions I get from the poem -- are universal human experiences, but no two experiences can be the same, so monoprinting suits as an visual metaphor.

I made a number of charcoal drawings, trying to get the sense of dark & light I wanted, and this weekend I went into the Book Studio of the Art School (where I have access to an etching press) and started working. Within the first hour I lost interest in the drawings. I read each couplet of the poem and responded to it intuitively, and within two prints of the edition had worked out an image, and I had to make that image over and over again, to the number of the edition (I'm hoping for 15, but I don't know how many I'll stuff up with the letterpress!). Here's one of my plates, to go with the first two lines of the poem:

Being alone is also to be learnt
Long time or short time.

Here's a print from it, still glistening wet:

As you can see from a few of them, each one is similar enough to be an edition, but they are all individual prints with distinctly different details. I'm aiming for that melancholy cast of mind you get when you arrive home at dusk to an empty house and the knowledge that no-one else is there or will be there.

It's taken me all weekend, and I've made 4 batches of pages. Each one is feeding off the others, and my ideas are shifting and fluid as I work. I have no idea what I'm doing on the next batch, but I will when I put the finished images in front of me the next time I get a chance to work, later this week.

So I'm getting there! I'll start printing the dry prints with letterpress and things will start to move faster then. I can't wait to get this book finished -- I want to hold the completed book in my hands!
Posted by Ampersand Duck at 9:25 PM 12 comments: