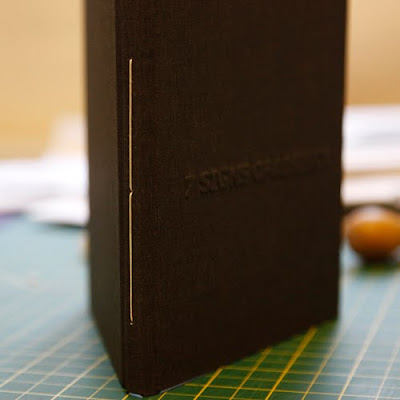 Just another quick update of my work in progress. I've been working solid at this every weekend and evening for what seems like ages now. After a few false starts, I finally got my print alignment sorted out and printed all the signatures, which took a lot longer than I thought. Actually most things have taken twice as long as I thought. I had already decided on a pamphlet stitch, and after a few nightmares with endpapers, decided to do a sewn through the spine stitch which made it easier to sew in the endpapers. 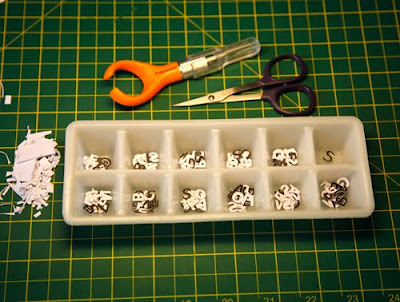 I finally decided on embossing the text on the cover. I did one experiment and part of me was hoping I wouldn't like it - the thought of cutting out 10 sets of lettering filled me with dread - but it looked really good. In the end cutting out the lettering wasn't half as bad as thought. I bought a really good embroidery scissors and another finger cutting tool (not sure what its called its the orange one above) which made it a lot easier. 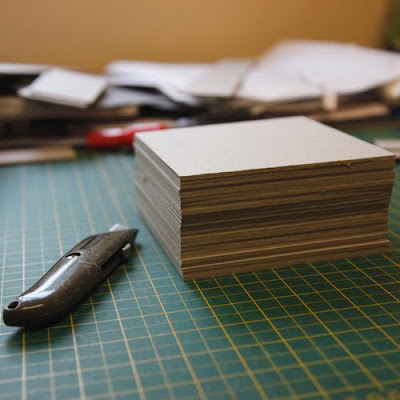 This is all the board cut out. 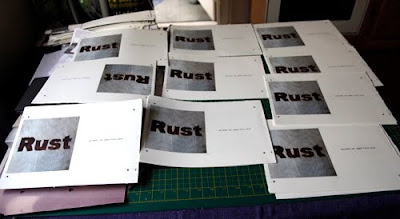 And this is all the signatures ready for trimming. They are all now trimmed and folded. 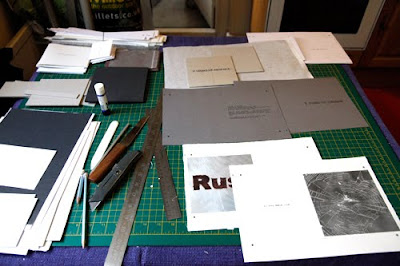 I am pressing the book twice, once after I've done the covers and again once I've sewn through the spine and glued in the endpapers, I noticed a slight warping of the boards on some of my practice attempts and this is working out much better. Because of this (double pressing) the whole process is taking longer again! I am working on it when I come home from work and leaving it in the press over night - which is effectively 2 days to make one book. That'll teach me for being so fussy.

So all the book components are ready, book cloth cut etc and just need to be put together. As of this evening I have made 3 of the edition of 10, and hope to have them finished by the 9th of May. I am totally exhausted, my wrists and shoulders ache, but its a good ache! I shouldn't complain, I know a lot of you have a lot more to contend with, like children, floods and moving house etc etc! I am really learning loads and feel I am moving from someone who 'dabbled' a bit to a fledgling book artist.

Helloo... you know what I'm like, always looking at the next thing in the pipeline! It's a very bad habit but one which I find hard to control. Anyway, before I get (any more) ideas about the next project, how do you feel about us writing up the current project for Sarah Bodman's Book Arts Newsletter? In fact I think there are various opportunities for publicity: there's the on-line Book Arts Listserve which is an email forum for discussion/promotion of all matters relating to artists' books and is an excellent source of information and advice, there's The Bonefolder which is an open-access e-journal for all things bookbinding and artists' book related, and if we take some good photos of our work I think there is also the opportunity to submit an article to Imprint, the printmaking magazine of The Print Council of Australia. There is even the vaguest of possibilities that next year's Impact conference (which will be in Melbourne) might be interested in a discussion panel on collaborative working...

BookArtObject has taken off brilliantly thanks to your involvement and what began in my mind as a way of reaching out to other book artists has become a fully-fledged project with a life and momentum of its own. I'm so pleased with what is coming out of the first piece of writing and I think it is worthy of being written up and publicised. The question is, how to do it? It would be great if somehow we could manage a collaborative article - with the proviso that no-one has to write if they don't want to! What do you think?

ps. the deadline for the Book Arts Newsletter is usually the beginning of the month prior to publication so, for example, the deadline for the June issue is May 6th which we aren't going to meet, but there is a new edition once every 4 - 6 weeks and there's no pressure to put something in right now!
Posted by Sara Bowen at 9:21 PM 8 comments:

THE LIBRIS AWARDS AND ANOTHER BLOG-MEET

Well, Sara and I had no problem greeting each other at the airport. Of course, Mackay Airport is
a tad smaller than Heathrow or LAX!
Back to "Te Whare Tini" (via the beach road) for some lunch nibbles and chatting and then it was time to head down to Artspace.
I'll let Sara write her view of the night (after a long, exhausting day she's still in the Land of Nod), but I will say, briefly, that it's lovely to now know two more of the BAO group. Last night,Sara introduced me to Caren, whom I'd have recognised by her bright red & brooch!
Now there's a powerhouse! She'd travelled from Canberra, been giving workshops and was still full of life and sparkle. Last seen heading for a Thai restaurant to (hopefully) tie up a business possibility.
Sara, The Man and I joined some other friends at La De Da for a meal. And such is the pull of art that two friends whose home and studio and garden took a battering from Ului were in town for the show. You just can't keep an artist down!
10pm may not seem late to some of you, but we'd had a long day ...
A few images... 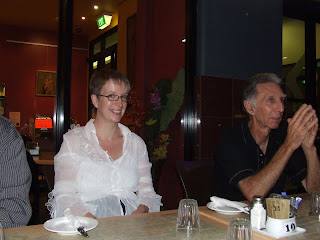 Sara and The Man at the Cafe
Sandra and Di at the Cafe. (Sandra has a print in the Printbank collaborative entry.) Not facing camera- Heather and Denise, both Printbank folk.
Of course, openings are always crowded and one never has a chance to really look at all the work, but I will say that there are some very impressive books here.
Off now to drive Sara to the airport...
I did see some people taking a few not-very-surreptitious snaps with cell phones, but we left our cameras outside
Posted by dinahmow at 5:53 AM 3 comments:

Wish I could be there!!!!!!  Good luck to Amanda, Sara and Ampersand Duck...and hi to Carol and Dina...have a drink for me when you all get together. I'll be thinking of you all tomorrow night and making my own toast. Have a wonderful time.  Best Wishes from Jane.
Posted by Ida at 4:44 PM 4 comments:

Home momentarily from New Zealand, going again this morning to parts as yet undecided. Western New South Wales most likely, but it depends on weather, state of the roads. It was to have been Longreach in Qld but everywhere I wanted to go has been flooded in the past couple of months so we're just going to see what we can see in NSW. Birds, I hope. And old hotels, and junk shops.

The most exciting thing on coming home was the enormous pile of mail, which I knew would contain books from Ronnie and Jane. Both, so different, but so beautifully thought out and executed. Thank you both so much, the Book Art Object books are taking pride of place on my shelves.

Mine is well under way, thank goodness. I'm still having moments of panic but I'm getting there. After months of thinking my life was too messy to be able to do this, I'm feeling that perhaps travel does clear the mind - hope so, anyway. I'll be computer free for at least a week, maybe longer, and because I'm with Vodafone, my mobile coverage will be impossible once I get beyond the big smoke. See you later...
Posted by Carol at 6:49 AM 3 comments: